Given annually to an AASV member who has made a significant contribution and rendered outstanding service to the AASV and the swine industry.

Dr Peter Davies is the 2019 recipient of the Howard Dunne Memorial Award. 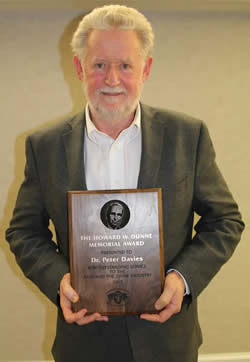 Dr. Davies was born and raised in Perth, Western Australia, but in his youth spent much time in the wool and wheat producing region around Newdegate where his grandfather was a pioneer farmer, and for about 50 years his uncle Des Cuff always kept a few pigs for fun. There, he became interested in "all creatures great and small," and never considered a profession other than veterinary medicine.

Davies received a Bachelor of Veterinary Science with Honors from the University of Melbourne in 1975, and a Doctor of Philosophy from the University of Sydney in 1983. He has practiced as a clinical veterinarian in Australia, New Zealand, the United Kingdom, and Ireland. During 1984-1986, he worked as a livestock advisor on an agricultural and community health project for small farmers in the northeast of Brazil. During 1987, recognizing the importance of veterinary expertise and specialty with life balance, he became involved in swine research as a senior veterinary officer for the South Australia Department of Agriculture, from where he was recruited to work at the University of Minnesota in 1991.

Davies has educated veterinary students in swine health and production, epidemiology, and food safety at North Carolina State University, Massey University in New Zealand, and the University of Minnesota, where he was the Allen D. Leman Chair of Swine Health and Productivity during 2003-2009. Described as a lifelong learner, Davies has facilitated lifelong learning opportunities for practitioners, including a peer group program titled Epidemiological Skills for Swine Practitioners. Davies and the current Leman Chair, Dr Cesar Corzo, are collaborating to create an updated iteration of that program to commence later in 2019. Davies has served on several National Pork Board and AASV committees, has provided leadership for AASV and Leman Swine conferences, and regularly has been an invited speaker at international meetings on swine health and pork safety.

Dr Davies has an extensive body of research and publications in swine health, antimicrobial use and resistance, and zoonotic and food-borne pathogens, including Salmonella and methicillin resistant Staphylococcus aureus (MRSA). He is now in the midst of a 5-year NIOSH funded study of infectious disease risks at the human-swine interface. Focused on MRSA, hepatitis E, and influenza, the research participants are practicing AASV members, together with a control group of companion animal veterinarians.

When asked what it meant to him to receive the Howard Dunne Memorial Award, he responded, "I am humbled and honored to have my name added to the list of Howard Dunne Award recipients - a list of AASV icons, mentors, and friends who have served and guided the swine veterinary community through the years. I am indebted to countless colleagues who have educated me along the way, and to the AASV for including me in its culture of exchanging experiences and lifelong learning - every conversation is an education!"

Davies and his wife, Rebecca, live in Minneapolis, Minnesota. They have two sons, JT and Brendan.