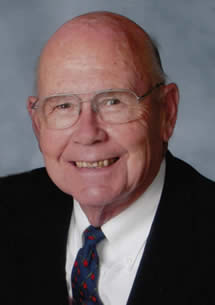 The children of the late Dr. David Schoneweis established a scholarship in his memory to benefit swine-interested students from Kansas State and Oklahoma State Universities. The $1000 scholarship is awarded annually during the AASV Annual Meeting.

Dr. Schoneweis was born in Clay Center, Kansas, and earned his DVM degree from Kansas State University in 1956. He served two years in the Army Veterinary Corps before teaching clinical sciences at Oklahoma State University for six years. After two years in private practice in Lawrence, Kansas, he joined the Kansas State University College of Veterinary Medicine faculty in 1966, where he received his master's degree in Surgery and Medicine in 1971 and taught food animal medicine for 30 years. Dr. Schoneweis was a charter member of the American Association of Swine Practitioners (AASP) and served on the association's Board of Directors in the late 1970s and early 1980s. In 1997, he received the AASP Meritorious Service Award for his lifetime of support for the association and in recognition of his work with students as a professor of food animal medicine at Kansas State and Oklahoma State Universities.

The scholarship is awarded to a student or students from Kansas State or Oklahoma State who participate in the student oral or poster presentations at the meeting, based upon a selection rubric prepared with the oversight and approval of the Schoneweis family. The inaugural scholarship will be awarded during the 2020 AASV Annual Meeting. Qualifying students will automatically be considered for the scholarship, and do not need to submit a separate application.