A novel biopsy technique for harvesting tonsillar tissue from unanaesthetized swine was developed, using conventional restraint and a mouth speculum. After application of a local analgesic, a disposable dermal biopsy punch was used to collect the tissue. The technique was applied to a total of 112 swine from three herds, with animals ranging in weight from 10 to 225 kg. Sixty-one days later, a second sample was collected from 19 of the pigs. All 131 samples were prepared for histopathology in neutral buffered formalin and were sectioned and stained using routine methods at a commercial diagnostic laboratory. All biopsies were examined histologically for the presence of tonsillar (lymphoid) tissue.

Of the 131 samples examined, 129 (98.5%) contained tonsillar tissue. The two samples that did not contain tonsillar tissue contained salivary gland tissue and were from small pigs (11 and 19.5 kg). This technique is a reliable method for harvesting tonsillar tissue from unanaesthetized swine of various sizes. It represents a valuable diagnostic tool for veterinarians, especially in the diagnosis of lymphotropic pathogens such as porcine reproductive and respiratory syndrome virus.

A safe and reliable method for col-lecting antemortem lymphoid tis-sue from swine would be a valuable diagnostic tool for the diagnosis of many important swine diseases. This is especially true for lymphotropic pathogens of economic importance, such as porcine reproductive and respiratory syndrome virus (PRRSV), pseudorabies virus, Haemophilus parasuis, and Streptococcus suis. Collection of tonsil biopsies from anaesthetized swine has demonstrated that PRRSV persists longer in lymphoid tissue than in serum.1 Wills2 documented that PRRSV is present in oropharyngeal scrapings longer than in fecal material and serum. These facts suggest that tonsil is a preferred antemortem sample for identification of PRRSV-infected animals. Previously published methods of tonsil biopsy have failed to consistently collect tonsillar tissue in unanaesthetized swine.3,4 Fairbanks et al5 reported that they could collect tonsillar tissue antemortem with uterine biopsy forceps in anaesthetized animals, but had less than optimum results in unanaesthetized pigs. Bierk et al6 reported that tonsil biopsy in mature sows using mare uterine biopsy forceps resulted in collection of tonsillar tissue only 50% of the time.

On assessing this published information, the authors concluded that existing methods of tonsil biopsy collection from un-anaesthetized swine were inadequate. New techniques that are safe, reliable, simple, and fast are needed to collect tonsil samples from swine in a wide range of weight classes. This paper describes a novel tonsil biopsy collection technique that meets these criteria, and also reports the accuracy of the technique in harvesting tonsillar tissue from swine over a wide range of weights.

The animals were restrained with a conventional cable snare over the maxilla. The palatine tonsil was visualized with the aid of an appropriately sized steel mouth speculum (Figure 1) placed between the maxilla and mandible at the level of the first premolar. A flashlight was used to provide light to the back of the oral cavity. Two mL of 2% lidocaine HCL (Phoenix Pharmaceutical, St Joseph, Missouri) was applied topically to the tonsil for analgesia and to depress the laryngeal reflex, by spraying with a 10-mL syringe and 20-gauge, 1.5-inch hypodermic needle. No attempt was made to determine the analgesiceffects of the lidocaine; however, no biopsies were attempted without its use. A modified 6-mm dermal biopsy punch (Miltex Instrument Company Inc, Bethpage, New York) was used to isolate a section of tonsil. The biopsy punch was modified either by inserting an 8-mm diameter, 18-cm long wooden dowel (a pencil), or the end of a curved, 310-mm Kocher hemostatic forceps, into the handle end of the biopsy punch. This enabled the punch to reach the posterior of the oral-pharyngeal cavity (Figures 2, 3, and 4). The punch was then inserted into the tonsil perpendicular to the epithelial surface until it reached the full depth of the cutting blade. After removal of the biopsy punch, the isolated section of tissue was visualized as a round, circumscribed "plug." In most cases (130 of 131), the isolated section was still attached to the main body of the tonsil, and was removed by grasping it with a sterile, 310-mm curved Kocher hemostatic forceps and applying gentle traction (Figures 5 and 6). 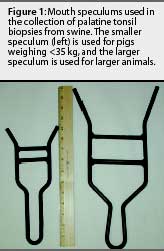 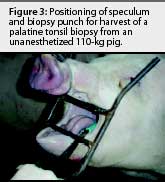 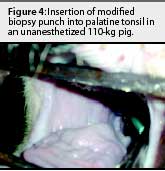 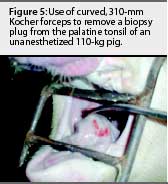 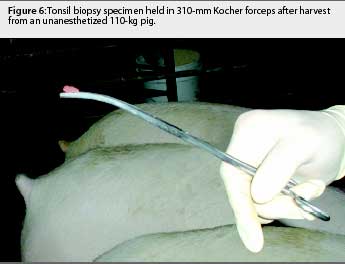 A field study was designed to test the ability of this technique to harvest tonsillar tissue from unanaesthetized swine of a wide range of body weights. The animals for the project were sampled from three herds over a 5-month period. All herds were commercial operations located in the Midwest.

After harvest, 112 of the 131 biopsy samples were placed directly in a 2-mL microcentrifuge tube containing 1 mL of RNAlater buffer (Ambion, Inc, Austin, Texas). The other 19 biopsy samples were first sectioned into two pieces with a new razor blade, so that each piece contained external and internal tissue. To recover both epidermal and lymphoid tissue in both sections, it was necessary to orient the sample so that the epithelial tissue could be visualized. The blade was placed perpendicular to the epithelial tissue and a slice made down the long axis of the sample. When samples were sectioned, one section was placed in RNAlater, and the other in a microcentrifuge tube containing 1 mL of neutral buffered formalin (NBF). Samples placed directly in RNAlater at the time of collection were frozen at -80°C. At a later time, they were thawed and sectioned as described, and one section was placed in 1 mL of NBF. The other section (in RNAlater) was archived for future diagnosis of PRRSV using reverse-transcription polymerase chain reaction. All samples in NBF were stored for a minimum of 10 days prior to routine histological preparation, which included hematoxylin and eosin staining. Samples were evaluated for histological characteristics of palatine tonsil.7

The tonsil was easily visualized in most animals using this procedure. All cases in which the tonsil was difficult to visualize resulted from the animal raising its tongue. This occurred most commonly prior to inserting the biopsy punch. In a few cases, the pig raised its tongue while the biopsy was being retrieved. Waiting 10 to 30 seconds before attempting to insert an instrument into the animal's mouth was an effective strategy to allow visualization of the tonsil when the animal raised its tongue. In a small number of animals (less than 10%), the plug could not be retrieved and a second insertion of the biopsy punch was necessary. In less than 50% of animals, bleeding from the biopsy site was observed. In no case, however, did this require intervention. Of the 19 animals that had two biopsies collected, all had evidence of missing tonsillar tissue at the time of the second sampling. All tonsils appeared grossly normal except for the 6-mm lesion that was created by the insertion of the biopsy punch for the first sample. We estimate that up to four tonsil biopsies (two from each tonsil) could safely and reliably be collected from an individual animal using this technique.

Of the 131 tonsils examined, 129 (98.5%) contained lymphoid tissue. Results of histopathologic examination for tonsillar tissue in the biopsy samples are reported by bodyweight quartile in Table 1. Tonsillar tissue was recovered on both occasions from all 19 animals that were sampled twice. The only two samples that did not contain lymphoid tissue were from pigs that weighed 11 and 19.5 kg, which were among the lightest pigs biopsied. In each of these cases, the sample was identified as salivary gland. Placement in RNAlater and freezing prior to placement in NBF did not prevent histologic identification of tonsillar tissue.

The 98.5% recovery rate of tonsillar tissue by this novel technique is much higher than that reported for previously published techniques in unanaesthetized swine.5,6 In addition, the samples collected in this study were the first that the authors collected using this technique, suggesting that it is simple to perform and requires little training. One person with an assistant to restrain the pig was able to sample most animals in less than 60 seconds. Animals weighing <20 kg or >200 kg were more likely to require a collection time longer than 60 seconds. The longer sampling time was most often due to elevation of the tongue, but poor restraint and poor lighting contributed to difficulties as well. All samples were collected in less than 3 minutes. Repeat sampling had no effect on the difficulty or accuracy of the procedure.

The two samples that that did not contain tonsillar tissue may reflect loss of tissue during sectioning of the biopsy. Tissue was selected for sectioning by visual inspection of the biopsy specimen. The harvested sample was very thin in the smallest pigs sampled, and sectioning may have inadvertently removed tonsillar tissue that had actually been collected. Alternatively, the technique may be limited with respect to its success in very small animals. The use of a 4-mm dermal biopsy punch should be investigated to determine if this would improve the rate of recovery of tonsillar tissue in very small animals.

This innovative biopsy technique represents a significant improvement over previously described methods for antemortem tonsil collection. It will provide veterinary practitioners and researchers with a novel tool for sampling lymphoid tissue from unanaesthetized swine under field conditions.