AASV meeting focuses on applying science and technologies in practice

Building on the 2004 meeting theme "Back to the basics," incoming president and program chair Dr Tom Gillespie chose "Applying the basics" for this year's meeting. A practitioner himself, Dr Gillespie is a proponent of the application of science in everyday practice. The program stressed the importance of veterinarians improving their knowledge of science. 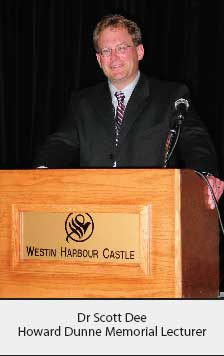 In choosing this year's Howard Dunne Memorial Lecturer, Dr Gillespie sought a veterinarian who models lifelong learning. His choice was Dr Scott Dee, who was denied admission into veterinary school not once, but twice, yet he became a recognized researcher and advocate of lifelong learning.

"In today's rapidly evolving swine industry, lifelong learning and the application of science in practice are critical for success," said Dr Dee. "The challenges of emerging and re-emerging diseases, along with the ever-increasing demand for scientifically sound information by swine producers, continually challenge swine veterinarians. In order to respond, veterinarians must constantly challenge themselves to improve their knowledge base and qualifications."

Swine veterinarians and guests attended the AASV Awards Reception, held to honor the 2005 award recipients. Presenting this year's awards was Dr Dave Madsen, past president of the AASV.

Swine Practitioner of the Year 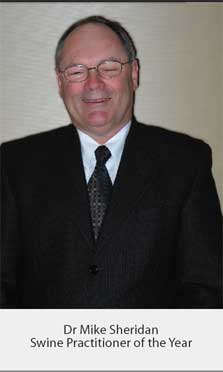 The AASV's highest honor, Swine Practitioner of the Year, went to Dr Michael Sheridan, Steinbach, Manitoba. Established in 1977, the award is given annually to a private practitioner who has demonstrated exceptional service to clients. Dr Sheridan is a partner and owner of the Sheridan and Heuser Swine Health Services in Steinbach, Manitoba. The practice provides veterinary care to swine farms throughout the province of Manitoba. For several years, Dr Sheridan has developed and taught training seminars for his clients. Dr Sheridan earned his veterinary degree in 1977 from the Ontario Veterinary College at the University of Guelph. Dr Sheridan and his wife, Judith, also a veterinarian, have two children.

On receiving the award, Dr Sheridan said, "A key theme during the general session on Monday was lifelong learning. Learning from my friends at AASV and sharing that newfound knowledge with business associates, fellow veterinarians, and clients is one of the driving forces in my life."

The Howard Dunne Memorial Award was presented to Dr William Brown, Wamego, Kansas, for his outstanding service to the swine industry and the association. Dr Brown is the health services veterinarian for Monsanto Choice Genetics, where he has worked since 2000. After graduating from Kansas State University College of Veterinary Medicine in 1971, Dr Brown was a private practitioner and owner of two mixed-animal practices in Hugoton and Ulysses, Kansas. He is board certified in the American College of Veterinary Preventive Medicine. Since 1992, Dr Brown has served the US pork industry through his efforts on the United States Animal Health Association's committees on foreign and emerging diseases and transmissible diseases of swine. Dr Brown is a member of the AASV's Foreign Animal Disease Committee. 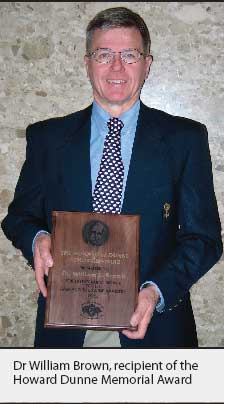 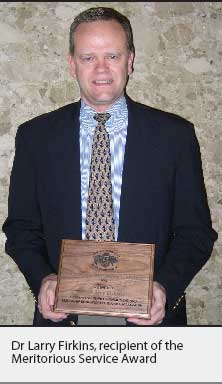 Jennifer Schurrer was awarded a $5000 scholarship by the AASV Foundation for best presentation at the student seminar on Sunday, March 6. Jennifer is a third-year veterinary student at the University of Minnesota. Her presentation was titled "The influence of environmental temperature on PRRSV retention in houseflies." Alpharma Animal Health provided the financial support for this award. 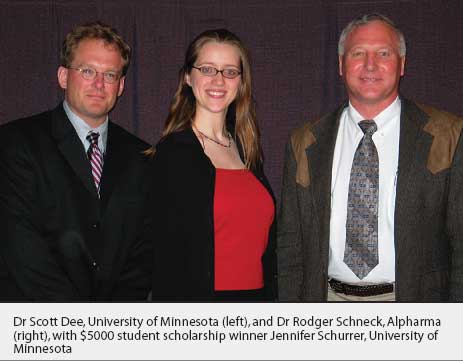 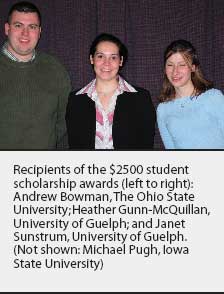 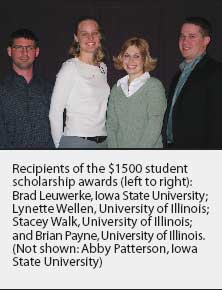 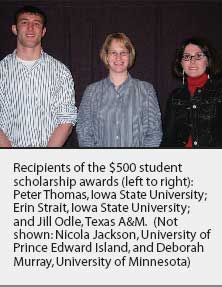 A panel of judges representing private practice, academia, and industry selected the recipients on the basis of communications skills in the writing of the abstract and the presentation of the paper, and on applicability of the research to swine medicine.

Fifteen students were selected to present during the annual meeting, from a pool of 34 who submitted abstracts for consideration. Each student presenter received a $500 travel stipend from Alpharma Animal Health to attend the annual meeting.

Dr John Waddell, AASV president, addressed the membership during the annual business breakfast. He reported that the association was in good financial health, with a stable membership base of 1550, $1.1 million in assets, and more than $800,000 in reserves.

Dr Paul Sundberg, National Pork Board, told attendees that demand for pork continues to increase. He updated AASV members on the constitutionality issue of the Pork Check-Off that is currently under review by the US Supreme Court. A decision by the high court is expected before June 2005. The National Pork Board (NPB) remains cautiously optimistic that a favorable decision will be delivered, but has made plans to prepare for continuation of the NPB in the event the court renders the check-off as unconstitutional.

Dr Bonnie Beaver, American Veterinary Medical Association (AVMA) president, briefed AASV members about misunderstandings regarding the AVMA's position on how it plans to address animal welfare issues. She stated that the current Animal Welfare Committee is not visionary, and the formation of an animal welfare advisory committee would be proactive and make recommendations that would be appropriate for animal welfare for all species. She encouraged continued dialogue between the AASV and AVMA.

Speaking on behalf of the American Association of Bovine Practitioners (AABP), Dr Rich Meiring, AABP president, noted the commonalities between the two associations, and invited members to attend the 2005 AABP annual meeting that will be held in Salt Lake City in September. Dr Meiring told members that the death of Dr Jim Jarrett, Executive Vice President, was a significant moment in the AABP's history. He reported that, effective March 1, Dr M. Gatz Riddell is the new executive vice president.

Swine veterinarians attending this year's conference could take advantage of the AASV Internet Kiosk, sponsored by Novartis Animal Health. Even while north of the border, veterinarians were able to stay connected.

English isn't your primary language? No problem! French-speaking and Spanish-speaking AASV members joined their colleagues for breakfast on Tuesday. Drs Julie Menard and Laura Batista hosted the well-attended events that were scheduled during the annual business breakfast.

A total of 51 concurrent industrial partner presentations were made to participants as part of the conference activities. Representatives of commercial companies staffed 53 technical tables. 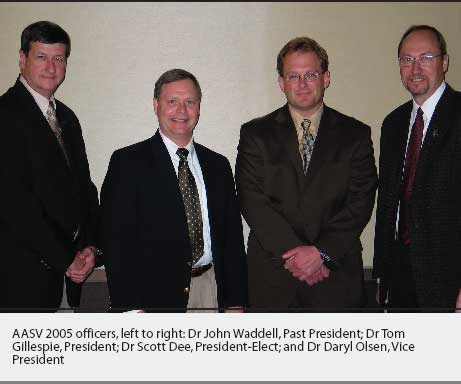 The 2005-2006 slate of officers was installed on March 8. Dr John Waddell passed the gavel to Dr Tom Gillespie, who assumed the presidency of the AASV. Joining Dr Gillespie as officers are Dr Scott Dee, president-elect, and Dr Daryl Olsen, vice president. Dr Waddell is the immediate past president.