Given annually to an individual who has consistently given time and effort to the association in the area of service to the AASV members, AASV officers, and the AASV staff.

Dr David Madsen is the 2019 recipient of the Meritorious Service Award. 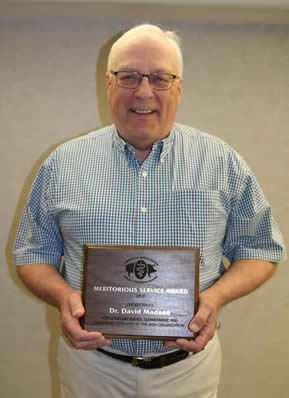 Born into a Nebraska family that raised purebred Hampshire pigs, Dr. Madsen became determined to become a veterinarian after following a local veterinarian on his father's farm. He earned his Doctor of Veterinary Medicine in 1969 from Purdue University. At graduation, he was the only member of his class with an interest in pigs. He was a swine veterinarian and practice owner in Illinois, Indiana, and Missouri, then moved to Nebraska to initiate SwinePro Associates, LLC., in partnership with Jack Anderson, DVM, in 1994. Madsen was also the Director of Health Services for Heartland Pork in Iowa and Premium Standard Farms/Murphy Brown in Missouri and Smithfield in Princeton, Missouri. In his career as a swine veterinarian and producer, Madsen has seen the emergence of many important swine diseases, including atrophic rhinitis, pseudorabies, circovirus, Streptococcus suis, and PRRS.

Madsen attended the pioneer class of the Executive Veterinary Program at the University of Illinois, and achieved Diplomate status of the American Board of Veterinary Practitioners in Swine Health Management in 1995, where he later served 10 years as the Vice-Regent, Credentials.

Madsen became a charter member of the American Association of Swine Practitioners (now AASV) in 1969. He served as a District Director for the AASV Board in 1992 and as AASV president in 2001. He represented AASV in the American Veterinary Medical Association's (AVMA) House of Delegates for 12 years, and was selected to represent all food animal veterinarians on the 7-person committee to write the AVMA Overarching Principles of Animal Welfare. Serving on the AASV Foundation Board, Madsen was integral in the support of future swine veterinarians. He proposed that the Foundation develop a free pre-conference seminar for students and recent graduates by funding the speaker expenses. He planned and moderated the first AASV student pre-conference seminar; that event has grown into one of the best-attended AASV conference seminars. Madsen proposed the phrase, "Ensure Our Future: Leave a Legacy," adopted as the motto by the AASV Foundation Board.

When asked to comment about receiving the award, Madsen responded, "AASV has been a large part of my professional, educational, and personal career, providing lifelong learning and introducing me to a large number of outstanding individuals. Although it took me 23 years to become involved with association tasks, my involvement was both rewarding and enlightening, to say nothing of challenging and entertaining. I would trade my experiences through AASV with no other opportunities."

David and his wife, Sandie, have a daughter, Jenna, who lives in Minnesota with her husband, John, and (grand)daughters Ellie and Sophia. Retired in 2014, David and Sandie live in Dillon, Montana, where he serves as Swine Outreach Coordinator for the Montana Board of Livestock, working with 4-H & FFA groups across the state. He also works as a part-time general practitioner in a mixed practice, and provides surgical services for the local animal shelter.