A leader has all the qualities of a child - an insatiable curiosity for learning, a boundless energy to put the learning into practice, and an ability to adapt to new behaviors very quickly.

-- Captain Michael McKean, former head of leadership training for the US Army, quoted by Jack Kahl in Leading From the Heart 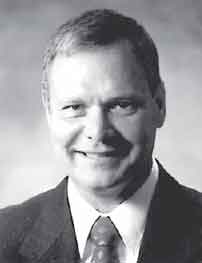 What does welfare mean to you? I have been asking members this question for several months. The range of responses has varied from a shrug of the shoulders to well-verbalized answers. Dr Randy Bush's big-picture answer was "any aspect of well-being that the caretaker knows to do but does not do." Before being too hard on a "shrug of the shoulders" answer, note that the definition of welfare is very complex, involving more than housing sows in gestation crates, transportation issues, and processing baby piglets. It represents a comparison of people's values, knowledge, and facts. In other words, animal welfare is a concept.

In 1991, Broom1 stated, "Welfare refers to the state of an individual in relation to its environment." Swine producers and their veterinarians have focused on health and production as characteristics of welfare. These are easy to measure, and historically, there has been a good correlation between health, production, and welfare. A unit not producing well may have both a health problem and a welfare problem, ie, the animals are under some kind of "stress." For example, several years ago, a client had a concern about high young-sow mortality. Investigation revealed extreme early weaning and underweight animals. The owner's business plan was "pushing" the animals too hard. The changes in animal agriculture in the past decade may be pushing biology and husbandry practices farther apart. If so, we need better welfare indicators. The primary focus for the anti-agricultural activists is interpretation of animal behavior. However, as animal perceptions are different from ours, this approach is inadequate. The accepted indicators of animal welfare include performance, health, behavior, and physiology. Taking a stand on just one indicator is an injustice to the well-being of animals under the care of producers.

According to Dr Jeffery Rushen,2 the literature is full of successful attempts to assess single issues of animal welfare. Assessing the overall effect of housing on animal welfare is a vastly more complicated procedure.2 Dr Rushen supports development of specific welfare indicators. Veterinarians and researchers are working to understand how animals relate to their environments, health issues, and management levels.

The National Pork Board's Swine Welfare Fact Sheet, March, 2002, takes a stand on defining responsible animal care through applying scientifically sound guidelines, with the goal of illustrating that proper animal care relies on interaction of caretaker skills, housing environment, and responses of the animals. Producers must balance economic survival and ethical incentives to understand what is best for their animals.

Consumers have sent a clear message of concern on methods of animal production. Effects on agriculture derive from what consumers are saying and how they are spending their disposable incomes. Veterinarians need to communicate their awareness of welfare issues in animal agriculture to corporate and community leaders.

The place for AASV members to make an impact is on the farm, doing what we do best. The leader's "insatiable curiosity for learning" should hold true for veterinarians, leading to a commitment of a lifetime of learning. Do you remember Dr Scott Dee's challenge to each of us during his 2004 Howard Dunne lecture on lifelong learning? Veterinarians must identify welfare problems and become part of the solutions as quickly as feasible. The Swine Welfare Assurance Program (SWAP) is a useful tool for practitioners. After enrolling my first herd, I realized that the process was not taken lightly by the farm's staff.

As science and technology advance, we must expect the standards for husbandry to evolve. The best way for veterinarians to capture the essence of leadership is to be involved: start by implementing welfare into your farm visits. Develop strategies to correct identified welfare problems and then develop programs to prevent their recurrence. Enroll swine units into the SWAP program. Animal welfare can easily become an emotional issue. Decisions must be based on sound and current science. The landscape of modern production is dynamic and must remain flexible as it adopts new standards necessary to enhance and not impair welfare.

I am confident that this organization can and will impact this important issue. We all are leaders in our profession and must lead "with boundless energy" to address welfare issues.

By the time this issue arrives at your homes, we will be headed into the holiday season. My most sincere and best wishes to each of you in your homes, practices, businesses, and in your advancement as professionals.