Keywords: diagnosis, food safety, pre-harvest, salmonella
Search the AASV web site for pages with similar keywords. Several molecular methods have in-creasingly become the preferred tools for diagnosis of foodborne pathogens, including Salmonella. These methods have allowed tracking of foodborne pathogens at the population level by enhanced detection and subtyping. Methods based on genotyping tend to have a high discriminatory power and offer rapid and sensitive subtyping, complementing conventional approaches that are based on phenotype, for example, serotyping and phage typing. Additional factors for consideration in the choice of molecular methods include reproducibility, ease of interpretation, and time and cost efficiency.

Not all molecular approaches are equally suitable for all foodborne pathogens. Selection of an appropriate method depends on the presence or absence of the specific gene allele of interest, stability or hypervariability of genomes in some pathogens, and the objectives of the molecular analysis. For example, genotypic methods, such as pulsed-field gel electrophoresis (PFGE) in association with serotyping, are often used to discriminate Salmonella serovars in foodborne outbreaks and epidemiological studies.

Three major molecular approaches used for the diagnosis and epidemiology of Salmonella serovars will be discussed: amplification of gene allele(s) by polymerase chain reaction (PCR), including multiplex PCR and real-time PCR; DNA-DNA hybridization (Southern blot); and fingerprinting (geno-typing), using methods based on restriction fragments, amplification, or both.

The basic principle of PCR is amplification (up to a million times) of the specific DNA sequence of interest within a few hours. The products of amplification (amplicons) are separated by size using gel electrophoresis. A detailed demonstration of PCR techniques can be found at http://www. dnalc.org/shockwave/pcranwhole.html.1

Before PCR may be used for diagnostic purposes, it is essential to have prior knowledge of a unique DNA sequence in the target (suspect) organism, which might be specific to a genus, species, or strain. In some cases, even if the same DNA sequence is present in two organisms, PCR may be used to discriminate between them on the basis of DNA fragment size.

Polymerase chain reaction has been used to detect Salmonella serovars in samples from different sources, such as poultry,2 swine,3 and cattle.4 The genes being detected are usually virulence determinants, such as sipB/sipC,5 himA,6 and fimA and tctC genes.7

A PCR method that can efficiently discriminate between Salmonella serovars is currently being developed, in which a DNA-based assay identifies serovar-specific antigens. First, the alleles encoding for three phases of the flagellar (H) antigen, fliC, fljB and flpA, are sequenced and characterized. Unique DNA markers are then identified, and these results are combined with similar assays for O antigens to complete the molecular diagnostic assay.10 Another recent report describes a PCR assay that uses the 16S and 23S ribosomal spacer region to discriminate between Salmonella serovars.11

Serovar Typhimurium has recently been identified as the most common Salmonella serovar isolated from humans and swine in the United States.12,13 An important characteristic of this serovar is the emergence of multi-drug resistant phenotypes, which are often characterized by phage typing. Phage type DT104, one of the most common multi-drug resistant and pandemically distributed phage types, is commonly resistance- (R-) type ACSSuT, exhibiting resistance to ampicillin, chloramphenicol, streptomycin, sulfamethoxazole, and tetracycline. Phage type DT193, also of public health importance and often associated with swine products,3,12 is commonly R-type AKSSuT, exhibiting resistance to ampicillin, kanamycin, streptomycin, sulfamethoxazole, and tetracycline.

The resistance genes involved in the pentaresistant DT104 and DT193 phage types have been previously described.3,14 These phage types can be detected using a multiplex PCR, which amplifies multiple genes in a single reaction. As an example, a multiplex PCR has been developed5 that detects phage type DT104 by amplifying two virulence determinant primers and one or more of the antimicrobial resistance genes described (Figure 1). 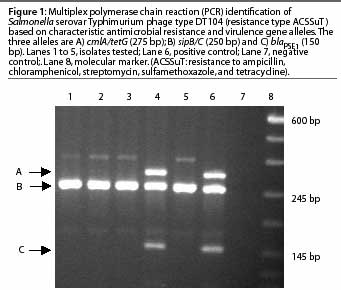 Real-time PCR is similar to conventional PCR in its basic principle and method, but measures accumulation of a fluorescent probe.15 The signal increases in direct proportion to the amount of PCR product in the reaction, enabling detection while the reaction is progressing. Two important advantages of real-time PCR are achievement of shorter processing time and lower cost by eliminating post-amplification gel analysis and enabling quantitative analysis of gene products. The latter is particularly useful in gene expression assays, where it is necessary to amplify cDNA in order to quantify it after it is produced from mRNA in the reverse-transcriptase reaction. Other advantages of real-time PCR are increased throughput, reduced chances of carryover contamination, and elimination of post-PCR processing as a potential source of error. Non-specific chemical agents that intercalate with double-stranded DNA, such as SYBR-green, are commonly used in singleplex reactions of real-time PCR. The real-time PCR principle has also been extended to multiplex reactions using sequence-specific probes, for example, the Taqman probe system16 and hairpin-shaped oligonucleotide probes called molecular beacons.6 As the molecular beacon approach is highly discriminatory and specific, it enables detection of as few as 2 colony forming units per PCR reaction. This method is often used to detect single nucleotide polymorphisms,17 for example, the gyrA gene mutation of fluoroquinolone resistance, that may produce adverse phenotypic manifestations. 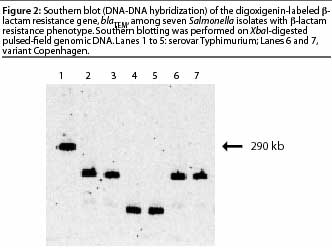 Hybridization of nucleic acid is one of the preferred approaches to confirm identification of a nucleic acid sequence in an organism. The blotting method suitable for identifying DNA sequences in bacterial foodborne pathogens is known as a Southern blot or DNA-DNA hybridization. Genomic or plasmid DNA from the organism is digested using one or more restriction enzymes, and digestion fragments are separated using agarose gel electrophoresis. After single-stranded fragments are blotted onto nitrocellulose or nylon paper, the gene probe of interest (labeled with radioactive or chemiluminescent digoxigenin) is hybridized. The target DNA sequence can be identified and its fragment size measured using an apparatus to detect radioactivity or chemiluminescence. Several studies have identified specific gene alleles in Salmonella. In an experiment to detect the [beta]-lactam resistance gene, blaTEM, and its location in seven Salmonella isolates, Southern blotting (DNA-DNA hybridization) was performed on XbaI-digested pulsed-field genomic DNA hybridized using a digoxigenin-labeled blaTEM gene probe (Figure 2). The blot showed that the blaTEM gene was located in different DNA fragments, showing that the isolates carrying the gene were not clonal; and that the gene was present on a large fragment (290 kb) in one isolate, implying that it was located on the chromosome.

Fingerprinting, also referred to as genotyping, identifies an organism or strain on the basis of its nucleic acid content (most commonly DNA). By definition, the most sensitive and accurate way of fingerprinting is DNA sequencing. However, approaches that indicate variation in sequences are less costly and more rapid than sequencing, and have been used effectively. Genotyping methods are commonly based on identification of restriction fragments, for example, by PFGE; amplification by PCR, for example, by amplified fragment length polymorphism (AFLP) or repetitive sequence PCR (Rep-PCR); or DNA sequence, for example, by multi-locus sequence typing (MLST).

The basic principle of PFGE, which has been used since 1984, is digestion of genomic DNA with rare cutter restriction enzymes specific for the organism of interest.18 For example, XbaI is the enzyme most commonly used for Salmonella serovars. After restriction enzymes digest intact genomic DNA embedded in agarose, digested fragments are separated in a pulsed-field gel electrophoresis apparatus. The most common system of electrophoresis is the contour-clamped homogenous electric field system (CHEF: BioRad Laboratories, Hercules, California). This method has been applied to identification of various pathogens and has been the standard genotyping technique adopted by the Center for Disease Control and Prevention (CDC) for subtyping seven foodborne pathogens. The CDC central database, also called Pulsenet,19 is an early warning system to detect unique PFGE patterns in isolates from cases of foodborne disease in humans and from food commodities. Detailed information on this system can be found at the Pulsenet website.19

The standard PFGE protocol has been previously described.20 Figure 3 shows distinctly different cluster PFGE patterns within and between different R-types (ACSSuT and AKSSuT) and phage types (DT104 and DT193) of Salmonella isolates from swine farms. 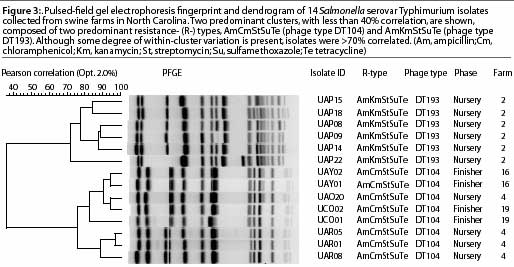 Amplified fragment length polymorphism, a recently developed alternative fingerprinting method,21 is a PCR-based typing system technically different from PFGE, with a high-resolution approach and high throughput capacity. Like other PCR-based approaches, this method is sensitive to contamination that may affect its reproducibility, and subsequently its sensitivity and specificity. In addition, this method requires relatively more expensive equipment, ie, a DNA sequencer, which is not available in most research or field laboratories. In preliminary studies, the discriminatory power of this method was similar to that of PFGE (Gebreyes, unpublished data). Published studies have also reported similar findings.22,23 The evidence in these reports and the standard use of PFGE in the national database (Pulsenet) make PFGE the preferred choice for subtyping foodborne pathogens, particularly Salmonella. Figure 4 demonstrates the use of AFLP in subtyping 48 Salmonella isolates collected from swine in North Carolina. Four clusters with 60% or less pair-wise correlation coefficients are shown. 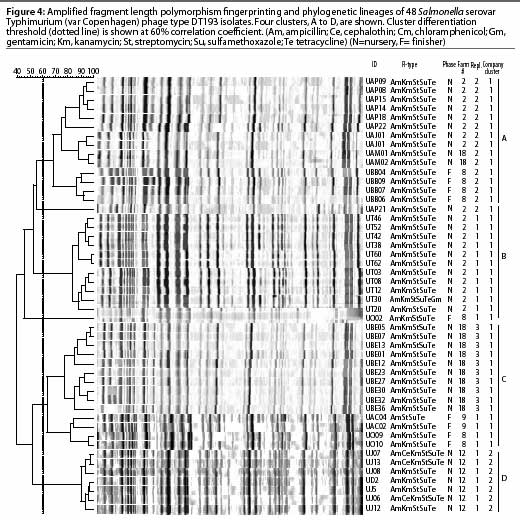 Other PCR-based methods, including Rep-PCR, have also been demonstrated as valuable tools for subtyping foodborne Salmonella from swine24 and other swine pathogens, such as Hemophilus parasuis.25 However, the discriminatory power and reproducibility of Rep-PCR is not well established and its use has been limited.

The described molecular diagnostic and subtyping methods have the potential to play a pivotal role in identification of foodborne pathogens at individual or population levels. Although methods based on singleplex PCR have been commonly used in diagnostic laboratories for diagnosis of clinical swine diseases, their use in identifying foodborne pathogens isolated from swine is limited, as these pathogens occur subclinically and their characterization is usually based on phenotyping (for example serotyping and phage typing of Salmonella). In research settings, PCR assays (traditional and real-time) are being further developed for rapid and accurate identification of foodborne pathogens in human foodborne disease outbreaks. Molecular methods in foodborne disease outbreak investigations are currently complemented with phenotypic analysis, because the genetic composition of foodborne strains remains largely unknown. One molecular method, PFGE, has gained wide acceptance for subtyping Salmonella isolated from humans because of the development of the Pulsenet database system. Previously, fingerprints of Salmonella isolated from swine and humans have been found to be identical and outbreak origin has been traced back to swine.26 In addition, human and swine Salmonella isolates from the same geographical location and with identical phenotypes (based on serotyping and antibiotyping) have also been distinguished (Gebreyes et al, unpublished data). As multiple genetic clones may exist within phenotypes, phenotyping is not sufficient to indicate clonality of organisms among various hosts. To fully understand the extent of strain sharing between different hosts, a fingerprint database for swine Salmonella (and other foodborne pathogens) must be developed and compared with the fingerprints of human isolates.