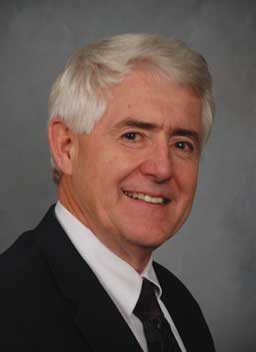 For a number of years, AASV and the North American pork industry have toyed with the idea of porcine reproductive and respiratory syndrome (PRRS) eradication, but never with traction. It is said that great ideas never brought to fruition are relegated to a dream echelon – a place filled with lost opportunity. An appropriate cliché, often spoken but rarely realized is “when the going gets tough, the tough get going,” which leads us in the direction of having hope. As veterinary practitioners, we have always risen to the occasion in both the difficult and best of durations. This is just another juncture. There are always openings in the hardest of times for the entrepreneur, motivators, innovators, and, yes – even an industry.

Over the past 3 months, AASV has once again explored the opportunity and structure of what a practical national PRRS eradication blueprint and implementation strategy may look like. It has been a welcomed distraction from pandemic H1N1. Long ago, AASV publically announced support of an eradication strategy when feasibility and producer advocation matured. A working group of your peers, all with notable disease-elimination experience, gathered to discuss the desperate needs of our struggling swine industry and how during these times we could “jump-start” interest in the final annihilation of “public enemy #1” – or should we say “pig enemy #1”!

Many ideas were explored with the realization that there would be no federal dollars for this exploit – nothing but producer commitment could drive this program from the onset. Most of us thought at first that this could only be an ignis fatuus – Latin for hallucination or mirage. Yet, as the discussion emerged, along with the harsh realism of the challenge, an aura of optimism, then enthusiasm, ripened.

Things had changed since pseudorabies had met its final demise. Although an eradication program would need universal support, national coordination, universally accepted definitions, local plans, eventual zones or state-status designations, and, finally, movement restrictions and control, scientifically we were in far better shape than at the beginning of the pseudorabies virus (PRV) eradication era. Industry-wide biosecurity knowledge and procedural compliance has never been better. Elimination without depopulation has repeatedly been accomplished by numerous producers at the herd, system, and regional levels. Veterinarians are knowledgeable and ready to help with elimination plans and the elimination process. Monitoring and surveillance are at a new “state of the art,” with meat-juice and cotton-rope serology and polymerase chain reaction. Filters are working and the cost is coming down. Vaccine initially impeded the PRV discussion in those early days because of its efficacy. With PRRS, there is no omnipresent vaccine in existence nor is one needed for eradication, albeit it is useful for control. It was the working group’s conclusion that the growing pig is primarily responsible for virus change and ultimately area, state-to-state, and country-to-country spread – in the end, the most difficult issue to address, but quite possible.

Following the initial meetings, the “task force” went to the field, to the producers, and inquired, “Are you ready for eradication?” Thus far, the answer has been an overwhelmingly “yes.” We have continued to pursue this with other stakeholders, and so far the answer seems to be, “It’s time to start, time to try.” Baby steps first, but giant steps to follow.

This message is somewhat a plea to join in. If we are to stay on the cutting edge of efficiency and cost, if our industry is to remain competitive in the global market place, if we are not going to give up and go home, then it is time. It’s time to take the bull by the horns; let’s rodeo PRRS out of existence. It is possible – feasibility is here, and here to stay.