President’s message
One million pigs on the road every day 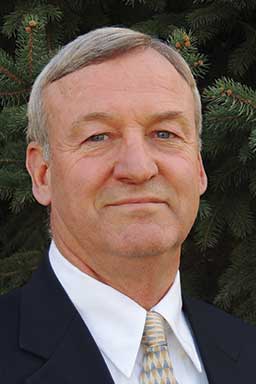 It is almost hard to believe. The United States produces 120 million market pigs per year, all moving by truck to markets. It is estimated that approximately 90% of these market pigs are moved offsite at weaning, and approximately 40% are moved again from nursery to another site for finishing. Also, accounting for movement of 3 million cull sows and 3 million replacement gilts makes a total of approximately 270 million pig movements on 260 workdays per year = over one million pigs on the road per day! If the 120 million market pigs alone are loaded 180 head per truck on 260 workdays, that is approximately 2500 truckloads per day. Add another 500 trucks for weaned pigs, cull sows, and breeding stock and there are approximately 3000 trucks moving pigs per day. You can work the numbers differently, but it’s still a lot of trucks with pigs traveling through the country every day.

During this year’s 2015 AASV Annual Meeting, three of our main speakers, Stevenson,1 Webb,2 and Desrosiers,3 addressed this issue as a threat to the industry. All three cited our experience with porcine epidemic diarrhea virus as evidence of how large the challenge would be to limit movement of pigs as a means of limiting the spread of a pathogenic new virus. If the virus had been a known foreign animal disease (FAD) such as foot-and-mouth disease (FMD), we may have been able to identify it sooner, but with 3000 trucks per day moving pigs (not to mention cattle trucks) we may not have detected it soon enough to prevent widespread dissemination.

Sustainability – at the local level our modern production systems are “economically sustainable” and can compete with any in the world. However, the mass movement of pigs represents a challenge to “industry sustainability” at an international level. Now that our pig industry exports approximately 25% of its meat, export sustainability equates with industry sustainability. An export-limiting FAD could have devastating effects on our markets. Can you imagine a 25% surplus? Also, as Desrosiers3 cautioned us, influenza may be our next challenge. Could the next influenza A virus (IAV) have a much higher mortality rate in pigs and humans than the novel H1N1 of 2009? If a highly pathogenic strain of IAV evolved, our domestic market could collapse as well.

Porcine epidemic diarrhea virus of 2013 has been a wake-up call. Novel H1N1 of 2009 and porcine circovirus type 2 of 2007 have not been forgotten. Fortunately these have had little impact on meat exports. Highly pathogenic avian influenza (HPAI) of 2015 has had dramatic effects on the poultry industry of the northern corn belt. Lessons have been learned from HPAI for mass euthanasia and disposal, routing of contaminated trucks, routing of clean trucks, farm worker movement, and other biosecurity issues.

At the time of this writing in September 2015 there are several reports of Seneca Valley virus – a vesicular disease of pigs which can mimic FMD. It is not new to the United States, but if its pathogenicity has changed, it could disrupt the movement of pigs as an FMD imposter.

What can we do to improve industry sustainability, especially with regard to livestock trucking. Limit the movement of pigs? Not likely. Manitoba has initiated a certified truck-wash program as a tool to prevent PED from hitching a ride on trucks returning from the United States. Livestock trailers returning to Canada from the United States are encouraged or required to be washed at a Canadian certified truck wash. Perhaps the United States should consider such a network of certified livestock truck washes with minimum standards at or near slaughter facilities. All departing trucks would be required to wash. Should we prohibit importation of feed ingredients from high-risk countries? The Food Safety Modernization Act should protect our industry, but will it? Perhaps a catastrophic production insurance program would be a means of protecting farms that experience either major pig losses or market collapse. The question is, of course, who pays for it?

Some good things are happening right now. Dr Jim Roth and his group at the Center for Food Security and Public Health at Iowa State University are developing protocols for a “Secure Pork Supply” plan to maintain business continuity for pork producers and processors during an FAD outbreak. The National Pork Board has funded a new project called the “Swine Health Information Center” to monitor disease threats, both domestic and foreign, and to coordinate preparations for any potential new outbreak. These are building blocks for our future.